Patna: Bihar DGP Gupteshwar Pandey has taken voluntary retirement from his service and he would take the plunge in oncoming Bihar Assembly elections. He is likely to contest elections from Buxar Assembly seat.

Gupteshwar Pandey’s VRS application was accepted late Tuesday night. He even handed over the charge of his post to S K Singhal. The Home Department has issued a notification in this connection.

He had even taken VRS during the last Lok Sabha elections, which he had later withdrawn.

Soon after his VRS, his social media campaign unfurled with full gusto. A video”DGP Gupteshwar Pandey Robin Hood Bihar Ke” has been launched on September 23 and within a few hours it has clocked 51,872 views, more than 9 thousand likes and 520 dislikes.

On the other hand his detractors too have become activated. They are saying it was a foregone conclusion that he would join politics. 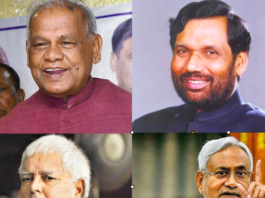